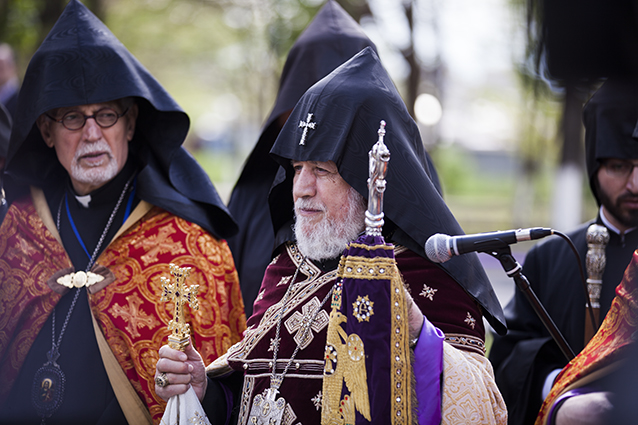 We praise the Lord most high on the occasion of this gathering. By the will of God, we have come together to commemorate the 100th Anniversary of the Armenian Genocide in brotherly love, prayer, and with united efforts to witness and realize Christ’s message “that all may become one” (John 17:21)

At the beginning of the twentieth century the monstrous crime of genocide was planned and carried out by Ottoman Turkey, millions of Armenians were forced out of their native lands and were decimated, and others were forced to convert. The wave of these horrific evils did not spare the other ethnic and religious minorities of the Ottoman Empire, like the children of the brotherly Greek and Syrian peoples. 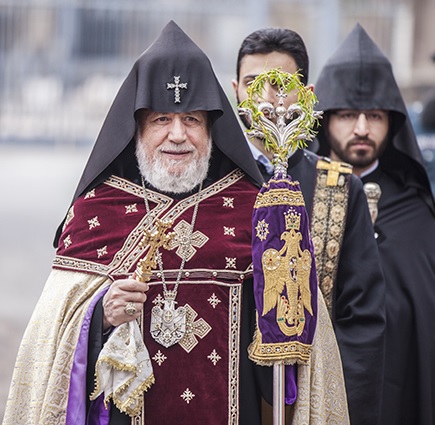 Dear faithful brothers, today in your countries many sons and daughters of our nation, who are the descendants of those Armenians who survived and dispersed throughout the world, live and work side-by-side with the Christ-loving flock entrusted to your care by the Lord and share in your sorrows and joys. They are living testimony to the barbaric crime. They are also our answer to the denial of the Armenian Genocide. In the name of our faithful, we express our gratitude to you for the care, love and your paternal blessings that you have continuously shown towards our people.
Many of you have come from countries of the Middle East. Today within the borders of your countries rest the remains of Armenians killed in the deserts of the Ottoman Empire, whom in the words of the Book of Revelations, still await justice (cf. Revelations 6:9-10). We believe that justice must be established on a firm foundation for the sake of humanity’s well-being, peace and solidarity.

The Armenian Genocide was accompanied by cultural obliteration as well. Many holy shrines, churches, monasteries, sacred spiritual and cultural treasures were destroyed and will never be replaced. Many of you have had occasion to visit Christian holy sites in Turkey, where prayers are no longer heard and which lie in ruins or are on the verge of collapse due to intentional neglect.

This is just a sketch of the horrendous crime that was committed at the beginning of the 20th century. The 100 years following the Genocide have been years of resurrection in our national life and a long, challenging path to bring justice for our people. It has been comforting that along this difficult path we have been assisted by our brothers in the great Christian family and by peoples and individuals of good will. We have been consoled by the unwavering support of civilized and progressive humanity, when various countries, organizations and individuals have recognized the Armenian Genocide and condemned this crime of the early 20th century.

The Church of Christ has a mission bestowed upon by the Lord to preach the life-giving Divine word to establish love, brotherhood and peace amongst people and to help prevent and heal the consequences of crimes against humanity. Crimes of all kinds, whether murder, terror, atrocity, or genocide, are violations of God’s creation and are transgressions against the sanctity and dignity of human life and therefore sins that must be atoned for through confession, repentance, and redemption. Guided by the apostolic word “to do everything in love” (1 Corinthians 16:14) and adhering to the church father’s exhortation to “love the sinner, but hate the sin,” the church never considers the expression of Christian love toward sinners to be acceptance or approval of sin or transgression. There should be no doubt that the condemnation of committed crimes is essential for the prevention of new evils and calamities.

Dear spiritual brothers, this is an occasion once again to raise our voices to condemn the crimes against humanity which have not yet received the justice they are due as well as the crimes being committed today, especially in the continuing conflict and terrorism in the Middle East, and to call on the leaders of all nations, states and international institutions to exert every effort to stop these crimes, which are bringing about destruction and slaughter of innocents.

We are deeply upset, that on the eve of the commemoration events of the Armenian Genocide, we are informed once again of crime against the faithful of the Ethiopian church that has been perpetrated by extremists in Libya, as was the same case against the Coptic Christians only months ago. As a result, our beloved brother, His Holiness Abune Mathias I, Patriarch and Catholicos of the Ethiopian Tewahedo Orthodox Church, was unable to participate in these commemorative events. We offer our support to our beloved brother and his faithful flock, praying that God receive in His dwellings on high the souls of the martyred children of the Ethiopian Church.

We convey Our brotherly love and gratitude to you all for partaking in the events commemorating the Armenian Genocide.

We pray that All-Merciful God will help and support us so that we may fulfill our mission and continue to work together for the sake of establishing peace, justice and solidarity in the world, for the glory of God, the vibrancy of Christ’s Holy Church, and the well-being of all humanity.

Manage Cookie Consent
To provide the best experiences, we use technologies like cookies to store and/or access device information. Consenting to these technologies will allow us to process data such as browsing behavior or unique IDs on this site. Not consenting or withdrawing consent, may adversely affect certain features and functions.
Manage options Manage services Manage vendors Read more about these purposes
View preferences
{title} {title} {title}